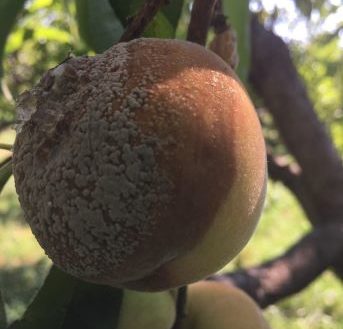 I don’t grow peaches. That unhappy confession is despite the fact that I grow peach trees. And rot. I grow a lot of brown rot.

In the humid eastern half of the United States, if you don’t somehow protect your peaches from both brown rot and the plum curculio, chances are your peaches are going to rot. Brown rot of peach trees is incited by the fungus Monilinia fructicola. This fungus is endemic to just about everywhere peaches are grown in the United States, even the West. However, in the West, drier conditions overall limit the most serious damage to spring flowers and it’s called “blossom blight.”

Another difference between East and West, in regard to brown rot of peaches, is the presence in the East of an insect pest, the plum curculio. The curculio doesn’t occur west of the Rockies. The curculio spreads the rot while feeding on immature peaches. Rain, especially blowing rain, is enough to spread the pathogen. But the curculio makes certain the deed is done by effectively inoculating the fruit when it punctures the fruit in order to feed and to lay eggs.

This combination of pathogen and pest can ruin entire crops of unprotected peaches. Organic peaches, especially at a commercial scale, are practically unheard of in the East. There are effective synthetic fungicides and pesticides for peaches. Organically-acceptable sprays of sulfur (for the rot) and Pyganic™ or kaolin clay (for the curculio) are also available. However, these organic alternatives are readily washed off by rain and usually have to be reapplied several times to effect control. The last three springs here in the Ozarks have been wet, wet, wet, and the would-be organic peach grower would have been put to the test to keep on a film of protective sulfur and clay.

There are two other alternative, non-pesticidal controls:  growing peaches in high tunnels (a.k.a., hoop houses) and bagging individual peaches. In both cases, the offending organisms are excluded from feeding on the peach. I usually bag a few dozen peaches every year but failed to get around to it this year. Sigh. As extreme as growing peaches in a high tunnel might sound, there is some commercial production employing this method in the East. Bagging peaches is discussed further in ATTRA’s Peaches: Low-Spray and Organic Production.  ATTRA’s High Tunnel Tree Fruit and Grape Production for Eastern Growers covers high tunnel production. 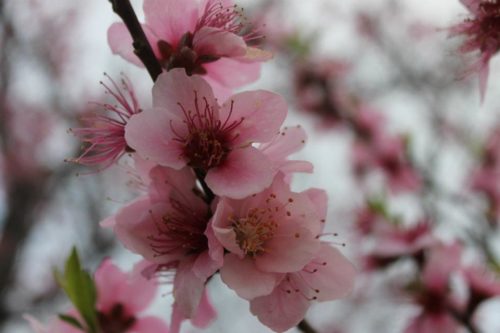 I love peaches, and I wish it weren’t so difficult to grow them organically on my Arkansas farm. I usually maintain around a dozen peach trees on the farm, but the only dependable harvests from them are the visual feasts of the trees in bloom. Luckily, that’s not insignificant!

If you have questions about growing peaches or other tree fruits, please contact Guy at 800-346-9140 or askanag@ncat.org.

← The Plight of the Monarch
Avocados: Fruit Set Challenges and Propagation →